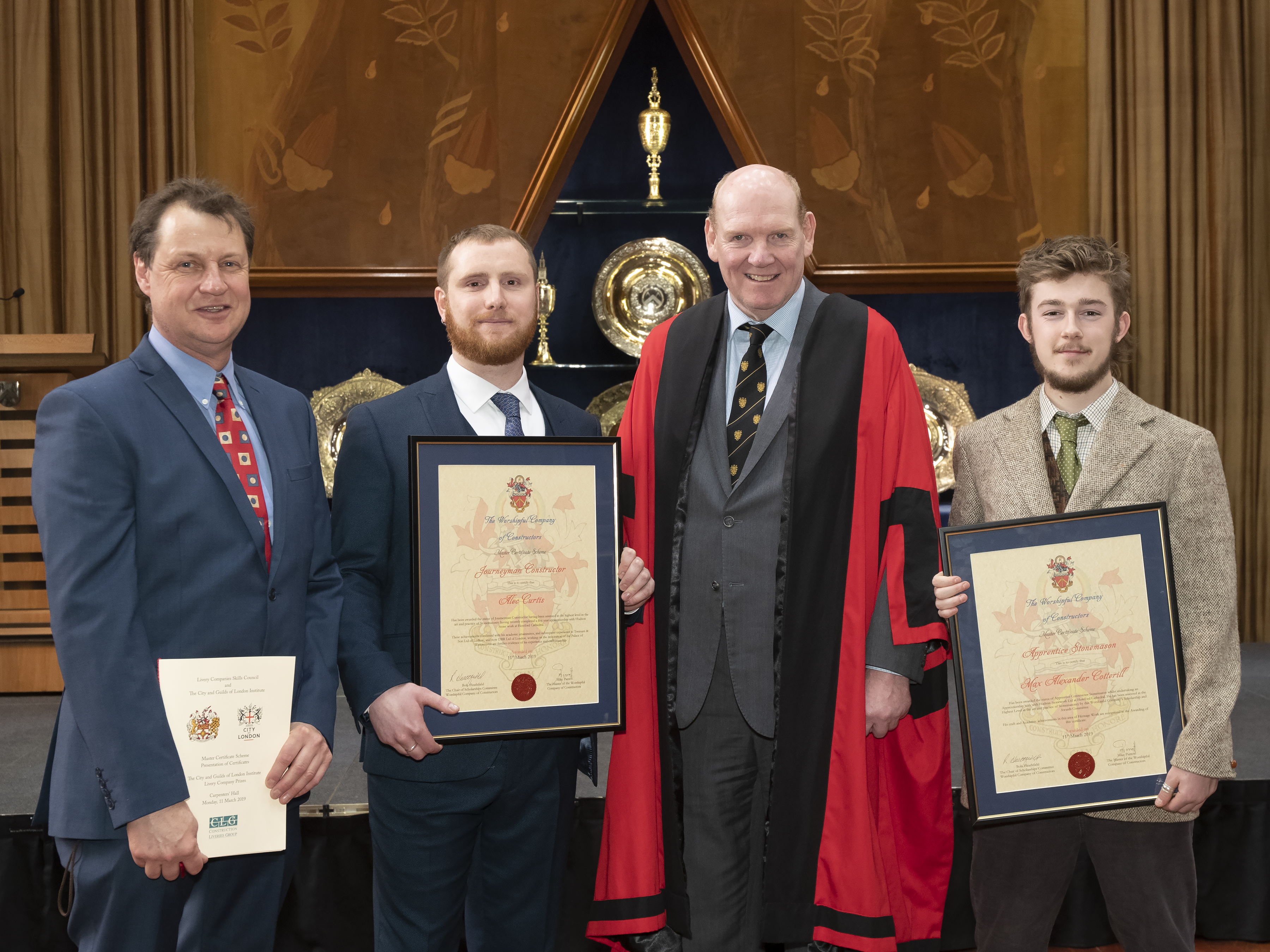 On Monday 11 March, two stonemasons who received their training at Hereford Cathedral, were recognised for their achievements by The Worshipful Company of Constructors.

Both Alec Curtis and Max Cotterill have been mentored by Simon Hudson of Hudson Stonework Ltd, which is based in Hereford Cathedral Close, during their apprenticeships. They have had the opportunity to learn all aspects of stonemasonry including banker work, intricately designed tracery and letter cutting. On-site projects have included Hereford Cathedral, historic St Bartholomew’s Church in Much Marcle and other churches, preaching crosses and important tombs in the Diocese.

Their apprenticeships have been supported with a grant from The Worshipful Company of Constructors, a modern City of London Livery Company for professionals working in the construction industry. The Company was granted Livery by The Court of Aldermen in 1990, followed by a Royal Charter of Incorporation by Her Majesty, Queen Elizabeth II in 2010.

Doug Barrat, Chairman of the Friends of Hereford Cathedral and past Master of The Worshipful Company of Constructors, has been hugely encouraging of the apprenticeships. He nominated both for the awards and for a grant from the livery company. This additional support has enhanced their apprenticeship experience and skills.

Now both Alec and Max have been recognised for their commitment to their craft at The Master Certificate Awards Ceremony in London. Alec, who joined Hudson Stonework Ltd in 2012, was presented with the Journeyman Certificate. During his apprenticeship he carved a new stone cross for Hereford Cathedral’s Booth Porch, an intricate finial on the corner of a pinnacle on the tower and since January 2018 has been working on The Palace of Westminster.

Max Cotterill, an apprentice at Hereford Cathedral since 2017, received the Apprentice Certificate. Max was recently commissioned by the Perpetual Trust to design and carve a roundel for HRH The Prince of Wales as a thank you for hosting a major event for the trust’s international donors. The roundel has now found its place at Highgrove. Max is currently studying his NVQ Level 2 at Bath College with a view to completing his Level 3 next year.

Simon Hudson said: ‘I am very proud to see two of our apprentices being recognised for their commitment to their work. Both Alec and Max are skilled young craftsmen and it is wonderful to be a part of their journey into becoming stonemasons. I am also incredibly thankful to the Worshipful Company of Constructors for all of their support, particularly with grant funding, which has hugely supported our apprentices.’