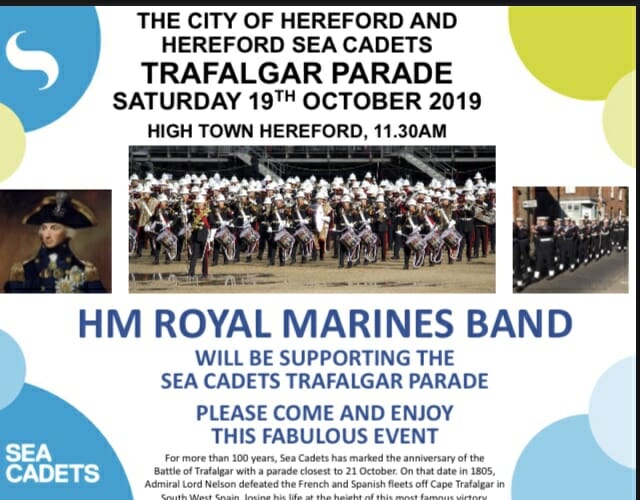 HM Royal Marines Band and the Sea Cadets will take part in a spectacular show of formal parading from St Owens Street to Hereford Cathedral to mark Trafalgar Day.

About 200 Sea Cadets from Herefordshire, Worcestershire and Gloucestershire will take part in the event on Saturday 19th October at 11.30hrs, with the parade accompanied by the HM Royal Marines marching band. Admiral Wilcox and local dignitaries will be attending this very exciting event which is being hosted by Hereford Sea Cadets unit.

Trafalgar Day is a chance to showcase skills and talents to dignitaries and to Hereford’s spectators and tourists. For more than 100 years, Sea Cadets has marked the anniversary of the Battle of Trafalgar with a parade on the Sunday closest to 21 October. On that date in 1805, Admiral Lord Nelson defeated the French and Spanish fleets of Cape Trafalgar in South West Spain, losing his life at the height of his most famous victory.

Hereford Sea Cadets is part of national charity Sea Cadets, which gives young people a new perspective. We broaden horizons and create possibilities. Working across the UK with 14,000 young people between 10 and 18, we help them see the world with confidence, gained through the challenge of nautical adventure and a Royal Navy ethos. Our aim is to help more young people to see the future that they want – and make that future happen.

The unit is open Monday and Thursday from 1845 to 2100, and meets at Hereford Sea Cadets, Wyeside, Greyfriars, Hereford, HR4 0BE. Visit: www.sea-cadets.org/Hereford to find out how you can join.