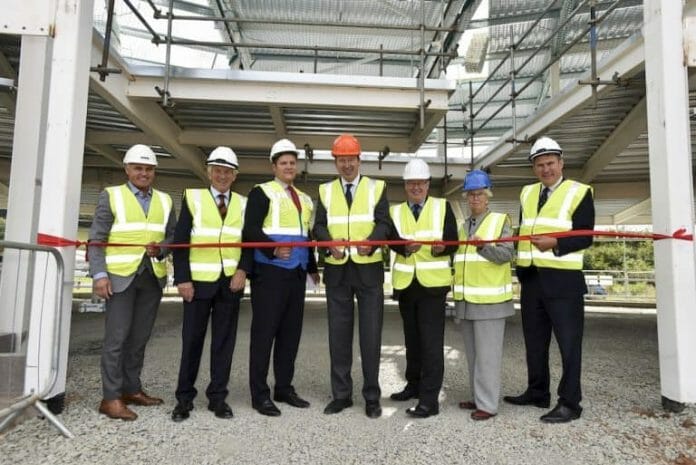 A new investment at Hereford Enterprise Zone officially opened this week – a development which will offer more than 61,000 sq ft of industrial and office space for businesses.

The first buildings available for rent or to buy are office suites of between 307 and 14,700 ft in a new two-storey building called Stirling House located at the entrance to Skylon Park.

Developers Priority Space have worked the Enterprise Zone team to bring the project to fruition, with a further nine units of industrial and warehousing space due to be completed in Spring 2019.

Mr Norman joined representatives from Skylon Park, Herefordshire Council and businesses based at the Skylon Park at the opening for a site tour, along with sales agents Jackson Property and Harris Lamb.

Chairman of the Enterprise Zone Andrew Manning Cox said: “Skylon Park is a fantastic location for new and growing businesses so we are delighted to welcome Priority Space to the Zone with its new development.

“The Skylon team was one of the first to introduce a speculative build to an Enterprise Zone in the UK with Skylon Court, which was at capacity within six months, so we know the requirement is there.”

Adam Richardson, Director of Priority Space, said the location of the Enterprise Zone just south of the city centre, with direct access off the B4399 Straight Mile and only 12 miles from the M50 was a factor, in choosing to build at Skylon.

“We know there is huge demand for both industrial stock and office space and the Zone has a track record for attracting businesses to the area. This will be further enhanced by the positivity resonating from Hereford, with the National Cyber Security Centre being the catalyst.

“We worked closely with the Zone team to get this build off the ground and expect interest to be high.”

Joint agent for the property Bill Jackson, of Jackson Property, said Centenary Park was an exciting development at Skylon Park.

“There are very few new build commercial properties being developed in this region, yet the enquiry level for premises like this is rising. Businesses are looking for not just quality warehousing and industrial space, but also office suites. Importantly they want to base their operations within an established and growing business park that has the right infrastructure already in place. “